Valentine’s Day Heart Display:  pickup a heart and tell us what you love most to add to our heart display and get CHOCOLATE !!!!

Join us in the student lounge for a banking information fair.  Learn more about the different options to assist you with finances during your studies at WCCMT.

Dress in green and submit a WCCMT themed limerick for a prize!!!

Violet Reid from National Student Loans is the western provinces representative.  Violet will be joining us to talk to students about repayment of student loans.

Nerve Impingement within the adductor hiatus with links to proprioception of the affected limb.

Massage therapy and the management of pain and neurological symptoms associated with a cervical compression fracture.

Jamie Johnston is a Victoria WCCMT alumnus, current instructor, and was recently featured in RMT Matters. The volunteer firefighter also works with the Victoria Grizzlies and recently returned from a trip to Peru with Firefighters Without Borders.

How did you decide you wanted to become an RMT? 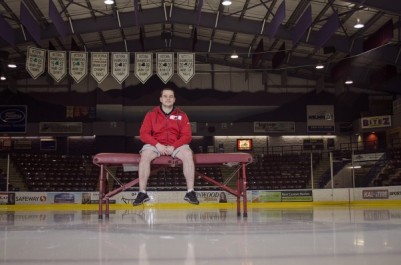 I used to be an industrial First Aid attendant at a sawmill up in Campbell River. The day came that the mill permanently shut down and I decided it was time to go back to school. I was thinking of nursing because I really liked working on people on the first aid side of things. I decided to do some aptitude testing to see what would come back. Massage Therapy was one of the things that came up from the test that said it would be a good option for me. I would have never thought of it as a career if I hadn’t done the testing, so I’m glad I did. After I saw this as an option I registered for the Intro course at WCCMT Victoria in August 2008 and was registered for the program that September.

What made you decide to come back to work for WCCMT?

I really liked a lot of the instructors that I had while in school and became friends with them after I graduated. I had come back a number of times to teach first aid to students and teachers that needed it and it seemed weird being on the other side of the massage table when I did. Two of my classmates came back and started working as supervisors and teachers, so I checked to see if there were any spots opening up for being a supervisor and was welcomed back. It’s been great ever since.

How did you end up working with the Victoria Grizzlies?

So after, I was playing hockey one Saturday night right after the Grizzlies in their rink and saw a few players and staff milling around the benches. So i thought “No harm in trying,” took my helmet off and asked the equipment manager to direct me to their athletic therapist, who turn out to be Dale Stewart.

Using some advice one of our teachers gave me I mentioned to him that I was a student and was interested in getting involved, told him i had an extensive background in First aid/First Responder. He told me to get his number from my buddy and give him a call. I ended up at their next game, completely amazed that i was hanging out in an arena, with my favourite sport, listening to a chiropractor, athletic therapist, and sports doctors talking about injuries and actually understanding what they were talking about. Now 2 athletic therapists later, I’m still with the team and still excited to go to the rink.

What kind of techniques do you use with players on the Victoria Grizzlies? How is working with a team different than “regular” patients? 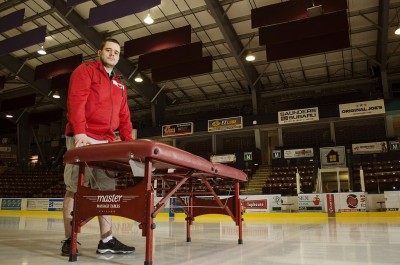 I use a lot of Graston technique with the Grizzlies, and a lot of pre-event treatment to help players warm up after they do their regular warm-up. Working with the team is a lot different than the general public. For one, at most games there is the chiropractor, AT, and me, directing players who they need to see and what needs to be done. We each have our kind of niche and make sure to send each guy with certain injuries or specific needs to the right therapy and constantly bounce players and ideas back and forth for whatever is needed. We are as much of a team as the players are together.

It’s also a lot less formal than working with the public. Players come in the treatment room in shorts and a t-shirt, there’s no draping or real formality to it. As the season progresses we get to know the players a lot better and there is a definite bond with players. And of course a lot of joking around and pranks that aren’t done in a clinical setting.

What about working with other firefighters?

If any of my firefighter buddies need treatment, they will typically just come over to my house to get me to work on them. The clinic I work at is about a 20 minute drive, so I’ll either help them out at the fire hall or at my place.

How did you get involved with Firefighters without Borders? 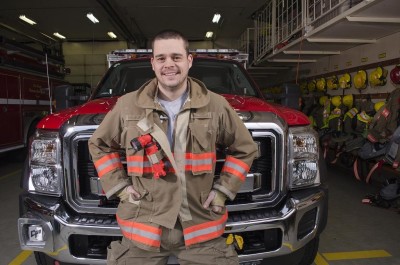 I was sitting in my chief’s office one day with one of our captains. They were talking about how they had just applied to the organization and I thought it sounded pretty cool. Part of the application process was to select three possible places to go, so I asked if they would mind me applying with them, they welcomed the idea. Part of the application was to put what courses you would be suited to teach. I’m one of our First Responder instructors so I volunteered for that. We were accepted and the following April went to Peru and worked with several different departments there, teaching everything from first aid, to auto extrication, rehab, inspection, and dealing with burns.

What has been the most rewarding aspect of your RMT career?

It’s hard to say as I like the relationships I’ve built with patients, teaching at the school, and relationships with other RMT’s. But I still get excited to go to the rink and work with the Grizzlies. I just love the team and sport environment, being at games, the team work in the treatment room and helping players perform better. It’s also pretty cool to watch players get their college scholarships and some get drafted to the NHL and know that you did at least a little something to help them accomplish that.