The West Coast College of Massage Therapy has a diverse and fascinating student body with so many interesting lifestyles and hobbies. We sat down with Joey Norris; a Term 5 student who is also a falconer, to talk about his experiences and the surprising similarities falconry and massage therapy share.

How long have you been involved in falconry?

I’ve been practicing falconry for eight years, during this time I’ve worked in film industry for four years. It’s not really a job, not really career but a way of life because you can’t leave the birds. Someone has to be there to look after them at all time.

Falconry has a long history in combat. While I was training, doing martial arts, I overheard my mentor, who was my fighting partner at the time, talking about a falconry workshop. I was like woah, you’re taking a falconry workshop? She said no, that she was running it! A few month later I was firmly entrenched, and I signed up to do all the dirty work. I kind of forced my mentor to keep me around.

How would you describe your relationship with the birds?

A lot of people have a tendency to treat them like pets, they want to walk up to them and pet them and kiss them. You cannot domesticate them, they are emotionally complete. They’re not a pet, they’re a companion. When I walk in in the morning, they will tell me whether or not they are happy to see me. You know, by the way they hold themselves. You learn how to read the body language, and the way they move. They have similar facial expressions. Obviously, they have a beak or a bill, not lips so they can’t smile like we do but you can learn to see how the feathers or certain types of feathers on their face are positioned and angled.

Is there one bird that you work with or have a connection with more than others?

It’s just like we have friendship’s, I can get along with anyone in my class but there are obviously a few people I get along with the most. We don’t consider them owned, because when we fly them, there’s nothing stopping them from not coming back, they choose to do so. My mentor has a good relationship with all of them but she has an unbreakable relationship with captain of the team -as we call him- Saber. The things that he’ll let her do is amazing. He’ll let her get in and nuzzle him or pet his feathers or scratch his head, all sorts of stuff. Not everyone can do that. Saber is amazing, so he’s not going to hurt anyone else who tries that but he’ll give you the warning, like “get the heck out of here, I’m not going to let you do that.”

My relationship like that is on and off with Mohave, a Red Tailed Buzzard. He terrifies most people because he’s huge. But when I work with him, he just cheeps away like a little baby, like a chick. It’s ridiculous! When were at home, at his place, I let him be boss. When he’s having a bad day, he’ll stomp his feet at me you know, to say “give me my food”  and he’ll be all bossy but when we’re on set and it’s work time, I’m the boss. You have these cool different kinds of relationships.

Have you been doing much since you started school?

I don’t have any time for this since I started the program. The only time I have done anything with my mentor since I started has been on long weekends and the breaks, because when I’m in school, it’s full time.

Why do you want to become an RMT?

I’ve always wanted to help out. I’m into martial arts, and I’ve noticed throughout the years, whenever you train with someone for a long period of time, you get comfortable with each other. A guy has a sore shoulder or a sore wrist from what you were doing, you want to help out. You stretch each other out; you massage each other; you want to help each other out. Whenever we did that, everyone wanted me to do it, they would say hey you’re really good at that, you should be a massage person-thing! At the time I didn’t know what it was really; to be a therapist.

Do you plan on continuing falconry after you graduate?

I’m going to do falconry after I graduate, I don’t know how but I’m going to do it. It’s always going to be a part of me. One of the major things I’m looking forward to doing post-graduation is going to be a martial arts instructor in Thailand. I was invited to work in a camp out there and the master there, who is a world champion, is into falconry. When he heard that I was a falconer, he that they could build a section of the camp where I could go out with my own native bird and keep practicing my art there.

What similarities have you found between massage therapy and falconry?

The relationships or the personal interactions are very similar. The first time I ever saw Mohave, he had just come out of a 12 hour flight, he was just a kid, maybe 12 weeks old and he was terrified of everything. He was scared of the sky, believe it or not. He always wanted to be under trees.  He was on my glove for about 13 hours straight, it’s a training technique called manning, and we were working together for his benefit, to help project care. After 13 hours of him being mortified of everything, including me, I fell asleep on the couch while we were watch a movie and I had my arm outstretched. He walked over and started preening my eyebrow. He was trying to clean my face. This was his way of trying to connect with me.

Thanks to Joey for sharing his exciting experiences with birds of prey! Want to share your story? Contact [email protected] to be featured in our blog. As always, WCCMT would love to see you on LinkedIn, our New Westminster Facebook Page or our WCCMT/CCMH Facebook Page so you can stay connected with our community. 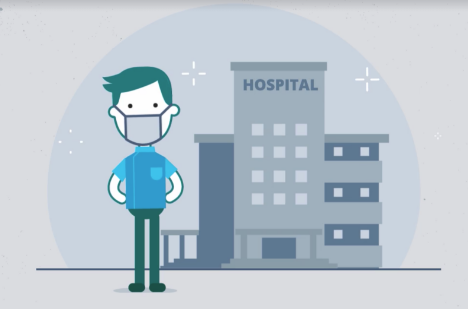 Ever wonder what it’s like to be a Massage Therapist? Sure, you’ve probably heard that it’s a rewarding career and about how quickly this field is growing and providing many opportunities for new graduates. But have you spoken to a Registered Massage Therapist about their day-to-day experience?

On our blog, we profile many recent graduates about their experiences and how their education at CCMH/WCCMT helped to inform their practice.

“Waking up every day to go to work was not something I looked forward to. Now, I wake up looking forward to my day. It is so nice to have something you are passionate about,” Downey says of her career.

Rashad La Touche came to CCMH Toronto after studying kinesiology and playing football at Wilfrid Laurier University. Now he finds his career as a Massage Therapist rewarding as well as challenging.

“Another challenge is learning how to help clients become comfortable with receiving a therapeutic massage. They’ve got to trust their therapist… and so, we all really learn how to be professional and build that trust,” La Touche says.

For recent CCMH Cambridge graduate and Active Release Technique provider Andrew Lefler, finding a work-life balance was hard at first, but he’s found that his career compliments his lifestyle.

“One of the best things about this profession is that you don’t have to take stress home with you very often. I try to take advantage of that and enjoy my time outside of work. I personally love going to the gym, so I make it a priority to get there a couple of times a week, hoping it will help me prolong my career as well. I also like having coffee with friends, and often go with ones I’ve made from my time at CCMH and it counts towards Continuing Education Units!” says Lefler.

Stacey Lewis is a RMT and the Director of Admissions and Marketing at CCMH Halifax. She loves supporting the next generation of Massage Therapists.

“I really love interviewing new students; I can see the look in their eyes. I can do something I care about… I can’t wait! There are so many options to choose from,” says Lewis.

A graduate of WCCMT Victoria, Stephanie McDowell has been practicing as an RMT since 2012 and loves working with her regular clients and seeing their progress.

“I am fortunate enough to be able to pick and choose the days and times I work and I have a broad spectrum of patients with varying and complex issues. It’s hard to put into words, but the faith my clients put in me is a very wonderful and humbling thing,” says McDowell.

We love hearing from graduates of our program who love the work that they do. Knowing that our graduates have found careers they enjoy in a field they’re passionate about makes us love what we do!

Are you a graduate of CCMH/WCCMT working as a Registered Massage Therapist and loving what you do? We want to hear about your experience in the field! Contact us at [email protected].


Learn more about other students who found their path at WCCMT by checking out our blog and following us on Facebook and Twitter.