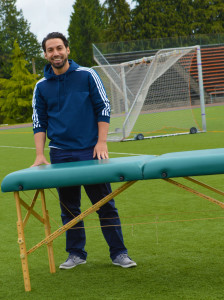 Reshad Etminan is a WCCMT graduate, RMT and Athletic Therapist who has always been interested in the sports world. At a young age, he was into sports and even played soccer at a very competitive level. He was so passionate about the game of soccer that he hoped for a professional career in it. Little did he know that this was only the gateway to an even more fulfilling career: one that would combine his love for the sport with his compassion for helping athletes.

In his youth, Reshad trained with the Canadian Youth National Team, which is where his interest in athletic therapy was first sparked.  While training with the team, Reshad tore his ACL which forced him to undergo an extensive rehabilitation process involving massage therapy. This process proved very successful in that it helped him get back to playing at the same caliber that he did prior to his injury. He was so taken with rehabilitation that he was inspired by the idea of giving back to the community and aiding athletes who have gone through similar experiences. It was at that point he decided that if soccer was not going to work out for him professionally, he would pursue a career in athletic therapy. 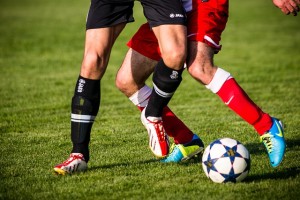 As time went on, Reshad instinctively knew that he belonged in the field of sports therapy, and so he attended SFU’s Kinesiology program and began his search for RMT schools. While others may have considered the field of Physiotherapy, what truly pushed Reshad into Massage goes back to how it helped him with his injury.  He notes that Massage Therapy helped rid him of the scar tissue built up surrounding his knee, and aided him in getting his ROM back to normal. Massage treatments also helped break down all the adhesions and allowed him to have that burst of speed he once had. Through this injury, Reshad had the chance to experience first-hand the incredible success massage therapy has with treating sports injuries, which is what transpired into his desire for becoming a RMT.

In 2011, Reshad came to WCCMT after finding us to be the most nationally and internationally recognized RMT School. Upon graduating, he became part of the Canadian Sports Therapy Association and worked in clinics that supported athletes. Today, Reshad works 3 days per week at Legacies Health Centre, which is the official provider for the BC Lions. He notes that he enjoys his schedule as it gives him more free time to expand his practice and attain different certifications in order to further pursue his career in the sports world.

So far, Reshad has had the opportunity of treating the BC Lions on game days and on recovery days and has also worked with the Vancouver Whitecaps, The Women’s National Rowing Team, Surrey Pegasus Soccer Organization, Men’s National Wrestling Athletes and with many other National athletes in Canada. 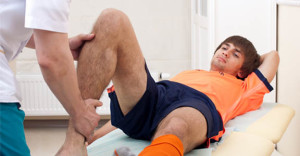 Reshad has had a very successful, intriguing and fulfilling career up to date and is always looking to further develop his skill set. While he is not limited to working with just one particular group of athletes for the time being, he would in the future like to focus on specializing in soccer-related injuries, and would really like to get into the Whitecaps program as one of their main sports therapists. For now, however, he will be focusing on getting himself involved in as many sporting events as possible in order to gain more knowledge and further expand his skills as a therapist. “I do not want to give myself any restrictions,” he states: “so ultimately my options are endless.”

Thank you Reshad for giving us such an incredible story to write about, one that is packed full of wisdom and inspiration. We are so proud to have such successful athletic therapists like you as part of our alumni network and are pleased that you are doing so well in your field of choice. We’d like to extend the above quote from you to capture your story into a final thought for all our readers: Do not restrict yourselves and ultimately your options will be endless. To learn more about Massage Therapy, check out our program!

Ask Cid: Why Do We Need to Study Ethics?

“I don’t know why we need to study ethics in massage school. Ethics are really just common sense and we already know what’s right and […]

Another WCCMT/CCMH first. The West Coast College of Massage Therapy is the first private teaching institution to offer an accredited Online Instructor Development Program. The […]

The Challenges of Treating Obese Patients

The Challenges of Treating Obese Patients Obese patients have far more strain on their bodies than those of average weight. The more weight a patient […]